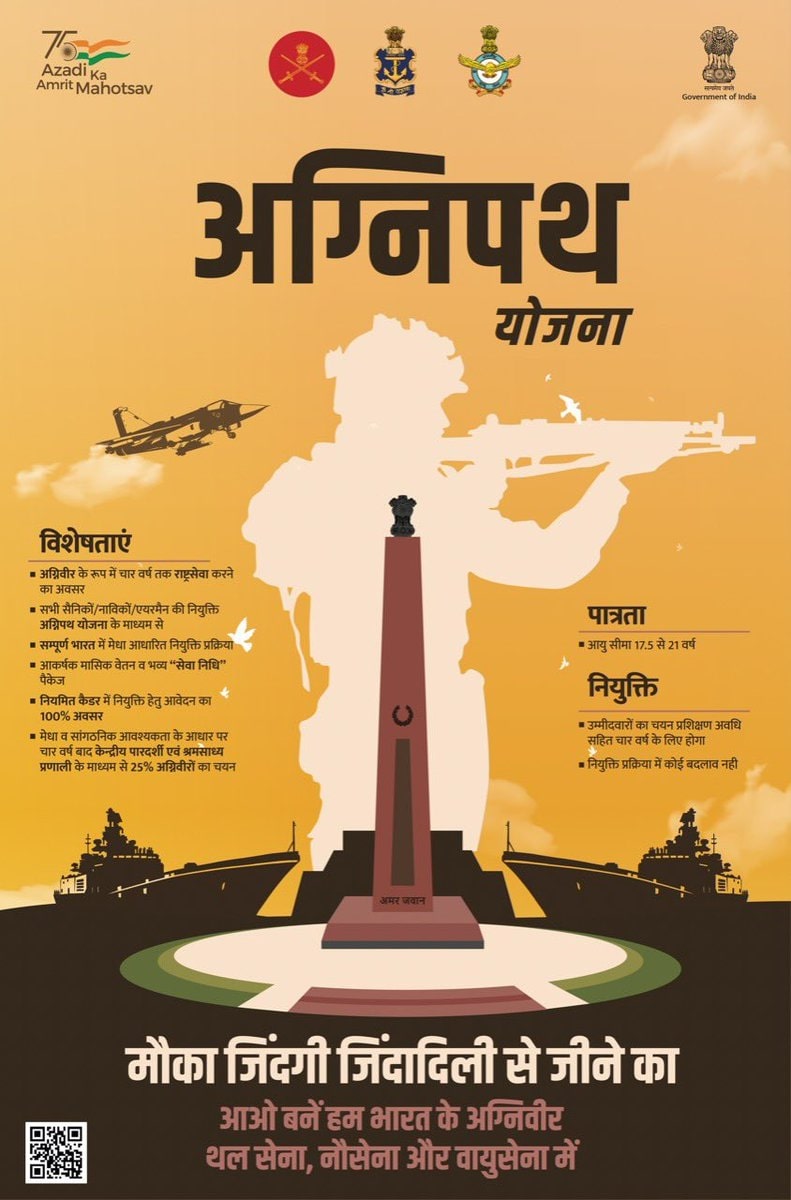 Indian defense ministry started and you scheme name Agneepath. The Agneepath scheme in Indian armed force selection in a new way for making better and Youth Force. Under this scheme any youth of India apply for this job, it’s a big opportunity to join the Indian Army Force and serve the country.

What is the Agnipath scheme and what are its advantages?

AGNIPATH Scheme in the Indian Armed Forces is a scheme wherein selected candidates will be enrolled as Agniveers for four years period. On completion of the four-year period, Agniveers will go to the society as a disciplined, dynamic, motivated, and skilled workforce for employment in other sectors to pursue their career in the job of their choice.

Based on organizational requirements and policies promulgated by the Armed Forces, Agniveers after completing their engagement period will be offered an opportunity to apply for enrolment in the permanent cadre. Of these up to 25% of Agniveers will be selected to be enrolled in the Armed Forces as a regular cadre.

Advantages This proposal envisages providing an opportunity to the youth to serve in the military for a short duration. It will also lead to a much more youthful and technically adept war fighting force by ensuring a fine balance between youthful and experienced personnel in the Armed Forces.

What are the broad objectives of the Scheme?

What benefits are envisaged to be accrued from the scheme?

The scheme would be a win-win situation for the Armed Forces, Nation, individuals, and the society at large.

What would be the impact of the scheme on the operational preparedness of the Armed Forces?

The operational effectiveness of the Armed Forces will enhance by this Scheme. By having a younger profile that is more fighting fit with fewer encumbrances, it is expected that the risk-taking capability of this personnel would be higher.

With the infusion of technology and revamping of the training programs, the Armed Forces would ensure that the personnel inducted under the scheme have the same skill sets which are required to meet the operational challenges.

Since the training standards are clearly defined and monitored by the highest authorities in the Armed Forces, it would be ensured that the Agniveers meet the highest professional standards.

The Scheme envisions the younger age profile of the Armed Forces. Is the Age eligibility criterion for enrolment under the Scheme different from the earlier practice?

Candidates between 77% to 27 years of age meeting other educational, physical and medical criteria would largely be enrolled as Agniveers.

The Scheme also aims to harness the “Skill India” initiative by enrolling candidates qualified as ITI/Diploma holders in the future with the necessary skills for certain technical trades.

Can the Agniveers opt for enrolment in the Permanent Cadre?

Based on organizational requirements and policies promulgated by the Armed Forces, all Agniveers after completing their engagement period will be offered an opportunity to apply for enrolment in the permanent cadre.

These applications will be considered by a centralized transparent rigorous screening system which would be based on merit and demonstrated performance during service. Up to 25% of the Aginveers would be selected for enrolment in the permanent Cadre as per the existing Terms and Conditions.

Selection of Agniveers for further enrolment into the Armed Forces will be the exclusive jurisdiction of the Government through laid down policies.

How does the scheme compare to the other nations?

A careful analysis of the methodology of induction, retention, and release of Armed Forces personnel in various developed countries was carried out to adopt the best practices being followed in these countries. The analysis revealed the following:

Primarily Volunteer Model: All countries including those who have conscription have a volunteer Armed Forces once the mandatory time stipulation is over.

Retention: All countries after the initial compulsory service period, retain soldiers based on their choice and a meritorious selection process.

Training: All countries have a shorter initial training period. Specialized training is imparted once the soldier is selected for service for a longer duration.

Incentivisation of Exit: These incentives vary from country to country but generally are in the following fields:

The Agnipath scheme aims to follow the same model and similar incentives as having been given in the developed countries.

The regimental system is one of the motivating factors for soldiers and officers to bond and perform beyond the call of duty during wartime. Will the induction change the same?

We shall be retaining the Regimental system since the Scheme envisages selecting the best of the Agniveers and only those who proved their mettle, the cohesiveness of the unit would be ensured by this personnel. Further, these aspects would be focussed upon and accentuated by the training received once the Aginveer reaches the unit.

Since there is going to be a limited training period, would it be adequate to meet the operational challenges?

Youth today eat better, run faster and longer, are more adept at technology, and adapt more easily to change. The aim is to exploit the talent of the present-day generation in our training patterns while simultaneously utilizing technology such as simulators to ensure an effective training program.

Since the basic qualification and qualities available to the youth have improved over the years, it gives uS an opportunity to restructure the training pattern with more time being available for both physical and technical training.

It also gives us an opportunity to review our present training patterns to make them contemporary, technology-based, and tailor-made for the requirements of the Armed Forces.

Is the Agnipath scheme likely to be opened to women?

It is envisaged that in the future women will be inducted in a progressive manner for joining the Armed Forces under the Agniveer Scheme.

How will this scheme ensure recruitment from all over the country?

The Scheme aims to capitalize on the broad-based talent pool of the Nation and select the best for a career in the Armed Forces. The present pattern of selection into the Armed Forces is not being changed with the introduction of the scheme.

The only change that is happening is in the Terms and Conditions of the service. As you all are aware, the three Services are having well-established selection centers spread over the country which has enabled them to recruit people from even the remotest part of the Nation.

Since these very selection centers would continue to undertake the responsibility of recruiting personnel, we expect that the a/l India representation would not be affected by the introduction of the Scheme.

What is the financial package offered to an Agniveer in the Armed Forces?

Agnipath scheme is a pan India merit basis recruitment system for 4 years tuner. Its have attractive emoluments and a handsome Seva Nidhi package. Agniveers also have the opportunity to apply for enrollment in permanent Cadres.

Based on merit and organizational requirements up to 25% of agniveers selected through Central, are transparent and rigorous after 4 years. It’s a real opportunity to serve the nation as agniveers through enrollment in the armed forces.